For a long while, extended exploration in Netherguild just wasn't fun. In this new update, however, I've finally fully addressed that issue! So let me take you on a journey where we solve the issue of tedious exploration together;
But first, preface!

Netherguild is a game about assembling an expedition deep into earth, exploring and bonding with your team members -
-it's also a turn based strategy-roguelite game set in a fantasy world with no magic.

Since then, I added a button that lets players automatically cycle to their current character's turn again, and thus recharge said character's movement- it was called "Cycle to Current", since it automatically started and ended the turns of every other character after the current one.

Having the player press a button every time they want to move more than 5 steps (during exploration) breaks the flow of the game and overall feels cumbersome- enter, ceaseless, recharging, unlimited movement.

While on it's own, it would have its separate issues (like players moving a ton of tiles with a single character instead of their entire party, entering combat with only a single character facing the enemy, and then losing said character), it is added alongside other features, which together contribute to smooth, seamless, fun exploration.

Now, this is one that has been requested since early on in development, but frankly I really wasn't sure how I'd add it at the time, so I sorta postponed it, over and over again.

But earlier during this update, I've made a goal to myself; to categorize all the areas and aspects Netherguild needs work on, and movement was a massive one- because you see, each time the player wanted to get from point A to point B, they had to move 4 characters to get there.

I tried adding a limited teleportation mechanic called "Assemble around me" where the rest of the player's characters would appear behind the one the player controls at the moment, but that really wasn't any good- again, we run into a similar issue to "cycle around me". The player has to press a button repeatedly, which turned exploration into a repetition of this;
Move, Assemble around me, Cycle to Current.

Imagine that, in a platformer game, you had to click on 3 separate areas of the screen / press 3 keys, repeatedly, all in the same sequence, just for a simple movement from A to B.
Therefore, Character Following + Recharging Movement is the strong due to replace Assemble around Me and Cycle to Current- making movement into an easy, seamless 1 step ordeal instead of 3 actions per movement.

More of a happy little accident than a planned feature, I thought adding this would be fun. And, it is. As much as moving in an isometric game where UP means "diagonally up left" might cause confusion, it ultimately feels somewhat intuitive and is connected to the camera rotation system, so that even if the player moves the camera, pressing "up" still feels like they're moving "up" in the direction of the key.

Walking through allies (and a handy "Swerving" animation)

When a character stands on a tile, should another character be able to walk through that tile?
The answer is probably "no", seeing how that character already occupies that tile.

However, if you're in a cave or some other enclosed space and you want to let your friend pass in front of you, would you not try to let them go through?

That's the thinking behind this addition! Also, at times characters would get stuck behind their teammates in combat, which felt frustrating. Frustrate no more!

At the moment the swerving animation is disabled while character following is happening, but that'll be improved in the future 👍

When players explored and encountered enemies in previous versions of Netherguild, it went roughly like this;
Combat begins; current character does their turn, other player characters act, then enemies do.

So the players get a whole turn ahead of the enemies! Sounds great, but; if they were to encounter enemies as they are exploring with their second character, it'd go like this:

So, in this update, to avoid forcing players into exploring with just a single character when they could do so with 4, I tried to come up with a solution...

And that's how I got around to adding an Initiative System, inspired by table top RPGs. To all of you unfamiliar with table top RPGs (such as DnD, Pathfinder and the likes), these games usually decide turn order in combat based on a dice roll; and go from highest initiative score to lowest. 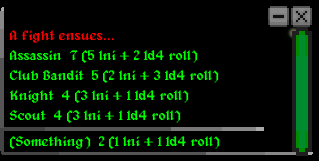 In DnD 5th Edition, for example, players roll a 1d20 (random number between 1 and 20) and add their dexterity modifier (usually -2 -> 4). Here, the dice roll is a big aspect in deciding turn order.

In Netherguild, however, I wanted myself and the players to have more control over the final result; therefore, I use a 1d4 + an initiative stat (around 4 for players and 2 or 1 for enemies).

That way, players get to usually move a bit before the current enemies in the game, but enemies may still move ahead of each other and turn order isn't fixed.

This lets players keep their edge, while mixing things up a bit and making every fight feel more interesting. It will also let me add more depth to items, skills and enemies in the future, which I'm definitely looking forward to!

Alright alright, this one isn't related to movement, but I wanted to add it here anyway because I'm really happy with it!- Bonfires used to look like this:

But, using sprites isn't really fitting for Netherguild- a game that is all about voxels!
So I switched that out to using cube-shaped particles;

And that's it for this dev log- hope it made for a fun read!
If you want to try Netherguild's alpha demo out, feel free to join the Discord at (https://discordapp.com/invite/netherguild), or play the demo.